Fondazione JobsAcademy and Rivierasca S.p.A. have been cooperating for innovation development as part of the AISAB (Applied Innovation for Students in Business) project.

Rivierasca S.p.A. is a SME founded in 1963 with 33 employees and a 10 million € revenue. The raw material consumption consists of:

in order to produce 4,5 million m2 /year of Glass Reinforced Plastic (GRP) laminates, with an internal waste production of 250 ton/year. The current market concerns the following fields: Do it Yourself, Industrial roofing and cold chain.

In 2001 Rivierasca starts looking for a suitable solution to recycle its scraps (250 ton/year) and also to improve its business. In 2012 the company finds a sustainable technical solution to recycle its waste and manages to create a new material which takes the name of “Glebanite”. Since 2012 Glebanite is a registered trademark in Italy and disposes of a quality label certified by CSI S.p.a..

The task that has been requested to the students in the context of the AISAB Project is to understand how to enhance Rivierasca’s Business Model based on the principles of circular economy, aimed at recycling waste materials by producing and selling Glebanite. Students have also been asked to find a way to encourage its dissemination and its exploitation among the companies operating in the field of composites.

After the first meeting, students began to design potential solutions to bring together all the stakeholders interested in the circular economy process proposed by Rivierasca S.p.a..

Starting from the recycling and production process of a completely recyclable new material, students tried to structure a shared hub, which can be joined both by interested companies operating in the field of composites (active members who own stock quotes) and other stakeholder such as designers or other companies with useful know-how.

The second solution concerns the creation of a web platform in order to explain this new Model of Business to all the stakeholders and provide a digital mean which matches offer and demand, with the scope of facilitating the activation of a spontaneous adoption of the new Business Model.

Students’ final proposal doesn’t completely exclude a possible future realization of the two above mentioned solutions but aims to be a little bit more concrete and also immediately achievable by the client. In particular it is composed of four core phases:

1. Development of Brand awareness and constant Communication: to create a Brand for the new material

Glebanite. This means defining a clear Mission, Vision, Core Values and Claim, and planning a communication strategy for all different channels.

2. Short-medium Period Scenario: to manage the entire recycling and production process inside Rivierasca’s structure. Since the company’s waste won’t be enough to satisfy the market demand, Rivierasca will collect other companies’ scraps and use it for its internal Glebanite production. This phase will last until Riverasca’s production capacity is saturated.

3. Long Period Scenario: when demand is increased, it will be necessary to duplicate Rivierasca’s recycling model. This can possibly occur in two different ways: by duplication (Rivierasca starts commissioning part of its orders to another company of composites which owns the necessary machinaries and also provides to this company the necessary know-how to actuate the recycling and production process) or by mobile recycling (Rivierasca starts commissioning part of its orders to other companies of composites materials which aren’t supposed to buy any machineries since there’s the possibility to rent a moving one).

4. Future Scenario: the project’s aims of dissemination and exploitation of the new Business Model have been reached. A circular system has been created that: absorbs all the composites materials waste, and eventually also the large quantity of EoL products of which some companies dispose; creates value through the production and sell of Glebanite products.

The final solution sees Rivierasca as the pioneer of a new Business Model based on the principles of circular economy thanks to the recycling of internal waste in favor of the creation of a new material: Glebanite.

Initially other companies operating in the industry of composites will only be indirectly involved in the recycling process. They will be asked to contribute by giving their waste or eventually to recycle and produce Glebanite commissionated by Rivierasca itself in case of need.

Hopefully after a couple of years those companies will experience the success of this Business Model and they will probably adopt it, becoming the first competitors of Rivierasca.

The birth of competitors represents a positive and natural consequence and it also proves the achievement of the prefixed goals: dissemination and exploitation of a New Business Model based on the principles of circular economy all over the sector of composites material.

The activities above described have been realised by Fondazione JobsAcademy’s students Silvia Cortinovis and Paolo Salvetti. 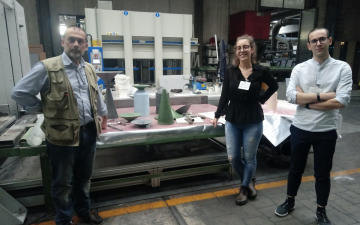